So yeah, I'm headed out to Thailand in a couple of days, and won't be back 'til I'm 31. And already, there are a lot of changes. Great changes. 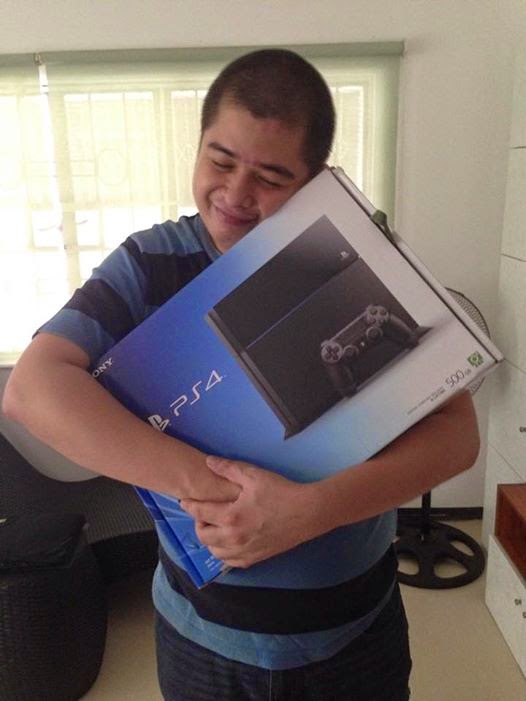 Well, yes, that's a PS4. And yeah, that's a bit of treat I had for myself after the windfall I finally got because of all the work I've been doing since I quit my job.

And I have to say, I'm happy. It came at the right time. It came at a time where I knew I was ready for it, rather than at a time where I just needed a distraction. In fact, things came together so quickly I haven't even figured out a code name for her yet. But needless to say, it was a long time coming, and even if she changes her mind tomorrow or the day after, I can safely say that this was a relationship I was prepared for.

It's refreshing to find someone who regards you as an equal instead of a subservient. It's a good change of pace to be appreciated for who you are, and not just remembered when there's nobody else to turn to. Ultimately, it's great to realize you are far more than just somebody's last resort. But it didn't happen overnight, because you built yourself over time to become that kind of person. And it's when someone realizes that about you that you begin to understand that the changes weren't because you just wanted to be with someone, anyone.

The changes were because you want to be a better person, period.

So I don't know where the next coming days will take me, but it's an exciting journey I'm rushing headlong into with eyes wide open. Because I don't wanna miss a thing.

But for now, even if this post isn't part of my Project 52, allow me to share a song with y'all...


I used to think relationships were a lot of stress, I used to think that pain was a part of happiness. Now all that's changed, since you've come my way. I don't want us to become another used to be...
Posted by Kel Fabie at 23.9.14 No comments:

Some of us hover while we're waiting for the other who was dying since the day they were born, well, this is not that: I think that I'm throwing, but I'm thrown.

And I thought of it forever, now I'm not so sure, you try to tell me that I'm clever, but that won't take me anyhow, or anywhere, with you.

Why The Word "Gamer" Is Slowly Losing All Meaning

.:Why The Word "Gamer" Is Slowly Losing All Meaning:.

Last month showed that even with all our so-called progress, it's still hard to be a woman. Not only did Cee Lo Green try to redefine the word “rape” by saying you can only rape someone who's conscious, you even had one of the largest scale hacks in history that exposed nude pictures of almost solely female celebrities for the internet to salivate on. This may not be the crux of this entire blog entry, but it certainly helps to emphasize the point I'm trying to make.

On the same month, a female (ah, there we are!) game developer named Zoe Quinn was doxxed and harrassed because of allegations made by a jilted ex-boyfriend via his blog, and Feminist Frequency videomaker Anita Sarkeesian was sent serious threats that forced her to leave her house, all because she bothered releasing a bunch of videos about tropes versus women in video games.

Funny how that works: the people denying that there's any mistreatment of women in video games end up making their voices heard precisely by mistreating women involved with video games. And funny how suddenly, gamers are all about fighting for journalistic integrity in their video game sites when the idea of "objective" video game "journalism" is laughable at best. Where were these guys when a low review for Kane and Lynch got a journalist fired? Oh, right. They didn't care because it didn't involve the wimmenz. They only raise a stink when it suits their misogynistic agenda.

But I'm not here to go on a feminist tirade about the ills of some gamers, and the complicity the rest of us have by not condemning it. What I'm doing is merely pointing at several events connected by only one apparent thing: misogyny, and how this has, directly or indirectly, led to the call by some game writers for the “death” of the term “gamer.”

I agree with them. But the whole issue of misogyny is only one of the issues why I do. I have several ideas why I feel that the term "gamer" is really becoming less and less relevant as time goes by.

.:The Term "Gamer" Is Getting Too Toxic:.

The people who most loudly proclaim they are gamers are often also the people who sneer at “fake” girl gamers, noobs, and Anita Sarkeesian. When one has to admit out loud they are also a gamer, they unfairly end up carrying the baggage of all these fringe lunatics (or are they really just fringes?) who give gamers a band name, and because of that, they end up saying “I play games, but I'm not really what you would call a gamer instead.”

If the term is now coming with more bad connotations than it ever has since it was first used pejoratively by the popular jocks at school, then it stands to reason that more people would stop labeling themselves as one. The word "gamer" is fast approaching a scorched earth status, and it's a little too loaded for the average person to want to let the term be associated with them.

.:There Are All Sorts Of Distinctions Nobody Cares About:.

Hardcores. Casuals. Console gamers. Portable gamers. Mobile gamers (yep, there's a difference.). PC gamers. What constitutes a video game has expanded to far beyond what we used to attribute to it, and it's bogging down the word. Suddenly, something like “Heavy Rain” is now a video game, despite the fact that it's more like an interactive movie with next to negligible gameplay. If you want to be even more crude, how do most H-games even count as games, when it's essentially just a “Choose Your Own (Sexy) Adventure” playing out on your computer screen?

We've heard people say that “just because you've got a camera doesn't mean you're now a photographer.” But that clearly doesn't apply to gamers, if we're willing to label some of them “casuals” just because. So just like calling someone a hipster, what exactly does it really mean to call someone a gamer now?

Remember Syndrome in “The Incredibles” when he said that if everybody is a super, then nobody is? That's exactly how the term gamer has become as gaming has become more ubiquitous than ever. You have people playing board games with other strangers in a cafe. You have people playing Angry Birds on their mobiles, and what right do we have to insist they're not gamers, too?

There was a time being called a gamer was some kind of insult. But now, it isn't an insult when nearly every single person on this planet is a gamer in some shape or form. When you see poor kids who spend what little they have on some DOTA matches, then you know gaming is far more all-encompassing than it's ever been.

Let's face it: everyone is now a gamer, and that word has lost all meaning. That's exactly why the most elitist of gamers loathe the “filthy casuals” and revel in how hardcore they play games, all the while losing the point of games.

There is no feminist or social justice agenda ruining gaming for everyone else. Feminists and social justice warriors just want to have fun with video games, too, the way every other straight, racially acceptable male already is. Is that really too much to ask? I don't think so. If you don't want to listen to feminists analyze your video games, then don't. You don't need to put all of your effort into destroying their lives, because if the issue is so "insignificant" to you, then why are you making this concerted effort to shut her up?

Ultimately, if everyone's a gamer, then using “gamer” as a mark of distinction no longer holds any value whatsoever. We're all just fun-seekers on a digital platform, and that's good enough for most of the world. Only those people who are asinine enough to want to own the rights to the term "gamer" feel otherwise, and as their whiny voices gets drowned out by the wave of people who have better things to do than to humor their petulant ways, things will march on. With or without them.


Now I know you're not a fairy tale, and dreams are meant for sleeping, and wishes on a star just don't come true...
Posted by Kel Fabie at 5.9.14 No comments: