Back To The M:TG Grind

Kind of difficult to say I'm going back to the grind when in reality, I have never extended this much effort in Magic: The Gathering before. Only now have I ever actually found myself seriously playing and actually making it far in tournaments like last weekend's Last Chance Qualifiers for the World Magic Cup Qualifiers, or a huge 37-man tournament for Legacy with a foil Liliana of the Veil on the line. 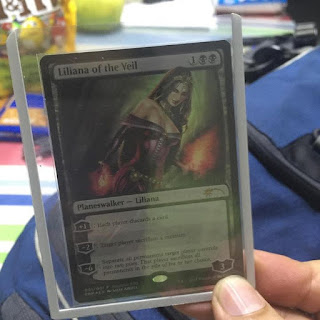 In any case, I've been doing a lot of playing lately, and that's really been paying off for me. Won an LCQ and could have tried out for the National Team, won countless Modern tournaments, did mostly the same in Vintage and Legacy, and so on and so forth. Overall, I've been on quite a roll, and it's been showing in the fact that I've been consistently placing in every tournament I've shown up in, and I'm even beginning to make some headway with Lantern Control, which is really one of the decks to watch right now.

In any case, that's all I could really say for now. It's good to be gaming this much again, seriously.