Indeed, Lourd De Veyra is correct. that's what happens to all of us in the end, and even someone who always seemed larger than life as Alan Rickman did could not possibly be immune from this reality.

I suppose it's just comforting to know that there is more to life than just eventually dying, or else I have nothing else to write after agreeing with Lourd on that point.

You see, it always seems like such an easy idea to attack people who sympathize with the loss of someone famous because we generally don't feel this way about other deaths. After all, there were people who lost their lives in Jakarta on the same day, after all, right? The thing is, though, this is not a contest, nor is there a shortage of sympathy and mourning to go around. Commemorating the life and times of Alan Rickman is not mutually exclusive from denouncing the needless loss of life in Jakarta at the same time. Because indeed, human beings do die, and that's why we need to cherish the human beings who somehow made a difference in our lives.

Alan Rickman was one such man to me.

No matter where in life I may find myself, I will always look to Severus Snape as the distillation of one's indefatigable capacity for love. Among all the characters in the Potterverse, it was Snape who resonated with me the most. Misunderstood as he was, nothing was truer about him than his love for Lily Potter, as unrequited as it may have been.

I know the pain of unrequited love. I know it all too well. I know how it straddles the fine line between a hopeless romantic and a creepy loser, and ultimately, I realize that there is nothing easy about carrying a torch for someone you love for as long as Severus did for Lily. The kind of love that transcended everything and extended to his implicit concern and affection for Harry Potter himself.

Indeed, it's easy to look at all that and to dismiss it as disturbing or pathetic. Yet at the same time, one cannot help but respect, if not admire that kind of devotion, because it goes far beyond reason, yet never once dips into something sinister or harmful. For all of Snape's fault, it was because of his love and not in spite of it that he managed to be the way that he was, working against years upon years of indoctrination, of biases, and predilections just so he could continue holding his torch of love.

It is in this fine line of sweetness and hopelessness that I see solace with Severus Snape, and it was Alan Rickman's masterful rendition of this character that has allowed me to truly find what it is about him that resonates within me. As changed as it may be, as different as the circumstances may be, when one would ask me, "after all this time?"

Without a doubt, the response remains to be, "always."

Magic is a lot of different things to different people. To me, magic is about going beyond the possibilities, and making something more of yourself than anyone ever expected of you. In that regard, everything Severus Snape did was truly magic.

So yes, human beings do die, but newsflash; it is the lives that these human beings have touched before they have died that choose to cherish and remember their legacy.

Alan Rickman has indeed touched many lives, and one of those will indelibly be mine, and that is why I will choose to remember his passing.

Whether he was a villain as sinister as Hans Gruber, or a schemer as ruthless as Judge Turpin, whether he was a man who would take your heart as Colonel Brandon, or one who would cut it out with a spoon as the Sheriff of Nottingham, Alan Rickman has managed to touch lives in a way that only he could. Is it truly a disservice to acknowledge that difference he has made? Was it not he who precisely told us that being an actor makes one "an agent of change," and in being such an agent, he has indeed changed the world?

Every single time I watched "Love, Actually" in the last couple of years, I never failed to relish how Alan Rickman's Harry became the polar opposite of his Severus Snape: a man who was so drowned in the mundane that he has lost the meaning of love and tried to seek it elsewhere than his own wife. It was something that resonated with me not because I went through the exact same thing, but realized that the love never went away, so much as it was forgotten.

So I will refuse to forget.

I will refuse to forget what it means to love, even if it will not always be given back in kind.

I will refuse to forget what it means to seek to change the world, no matter how seemingly insignificant it is that we do. There is no opportunity too small to make a difference.

Ultimately, I will refuse to forget the fact that though human beings die, but they can also live forever, thanks to love and magic.

I mourn the passing of Alan Rickman not so much as it is because he is a celebrity that I know of. I mourn his passing because thanks to him, I got to know myself just a little bit better, and there is no greater boon a performer can bestow upon us than leading us down the path of self-discovery.


Thank you, Alan Rickman. When I think of one word that could best describe what you have inspired and enabled in me, I do believe that word would be "Love," Actually.

Email ThisBlogThis!Share to TwitterShare to FacebookShare to Pinterest
Labels: eulogy

A crazy year, but one I'm glad I went through. Here's what I ended up realizing about the year that was...

1. What did you do in 2015 that you'd never done before?
I hosted a TV show. I'm hoping there's a second season, but the jury's still out on that one. It was on PTV-4, and it felt like I was doing something important there.
2. Did you keep your new years' resolutions, and will you make more for next year?
I didn't make any last year, and I don't plan to make any this year. As it has always been.
3. Did anyone close to you give birth?
Jaycie Tanseco, I guess? Can't really recall anyone else at the moment.
4. Did anyone close to you die?
Celebrity deaths abounded, but this year, I think I was spared the loss of anyone specifically close to me.
5. What countries did you visit?
Welp. Looks like I stayed in all 2015. :|
6. What would you like to have in 2016 that you lacked in 2015?
More shows as a solo performer. I slowly made headway into that this past year, but I've only just begun. Also, I ought to travel more. 2015 was pathetic for me, travel-wise.
7. What date from 2015 will remain etched upon your memory, and why?
December 18. The day Patty told me we were going to give this a try. 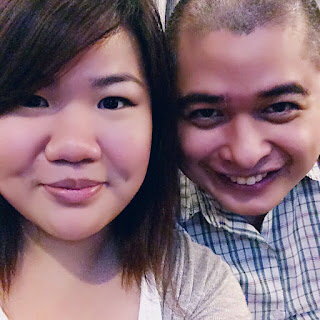 
8. What was your biggest achievement of the year?
Hosting "Bara-Bara: Anything Goes" on PTV-4  was a big deal to me. I never would have thought I'd be doing that. I also managed to get a nameplate on Kick Engines for winning a big Legacy tournament.
9. What was your biggest failure?
Playing sidekick to someone who never once really knew the value of that. For years. Talk about sidetracking myself.
10. Did you suffer illness or injury?
Food poisoning a couple of times?
11. What was the best thing you bought?
Several Modern decks that really gave me a semblance of an MTG career!
12. Whose behavior merited celebration?
Ryan Rems Sarita, for winning "Funny One" this year. Cheers, mate. And for most of my friends in comedy and improv, seeing as a lot of them really stepped their game up in 2015. Also very proud of Rederick Mahaba and Vintendo, two of my friends from PWR. I think it's pretty awesome to see them live out their dreams as professional wrestlers. 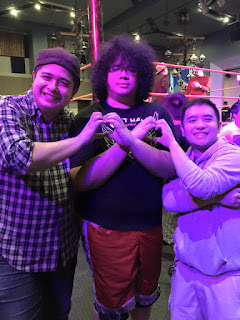 Love, Rederick, love!
13. Whose behavior appalled you and made you depressed?
Oh, you know. The douchebag who thinks he owned my free time? The guy who apparently mistook me for his boyfriend. LOL. There were a few more, but I'm willing to accept part of that was my fault, so I don't really resent them for it.
14. Where did most of your money go?
MTG, Food and Uber, it seems.
15. What did you get really, really, really excited about?
Hosting a TV show. I will keep harping about it whenever applicable. And oh, definitely Patty. Hee!
16. What song will always remind you of 2015?
"Thinking Out Loud" by Ed Sheeran, but only because it refused to go away since 2014. If I had to pick an exclusively 2015 song, I would probably say "Hotline Bling."
17. Compared to this time last year, are you:
i. happier or sadder? – mostly happier
ii. thinner or fatter? – fatter
iii. richer or poorer? – richer
18. What do you wish you'd done more of?
Gigs, and actually writing for Cracked.
19. What do you wish you'd done less of?
Beating myself up over past failures.
20. How will you be spending Christmas?
Quietly spent at home.
21. Did you fall in love in 2015?
Absolutely.
22. How many one-night stands?
Nah.
23. What was your favorite TV program?
"How To Get Away With Murder," although the other shows I've been already watching still stand: Hannibal, Elementary, and Flash.
24. Do you hate anyone now that you didn't hate this time last year?
Yep. It's a wonder I put up with that one for as long as I did.
25. What was the best book you read?
"Mind Mysteries Guidebook, Vol. 1,"  but only because that's the only physical book I've actually read this year.
26. What was your greatest musical discovery?
I have a thing for death metal covers of really popular songs, like say, "Hello," by Adele.

Hello from the f*****g other siiiiiiiiidddddddeeeee!!!
27. What did you want and not get?
To go to Hong Kong with my old friend, Jan. Sadly, budget concerns got in the way.
28. Favorite film of this year?
It's either "Heneral Luna" or "Magic Mike XXL," or "Star Wars: Episode VII," but the last one is mostly just a reflex action from the guy named "mistervader."
29. What did you do on your birthday, and how old were you?
I was actually at a wake when I turned 32.
30. What one thing would have made your year immeasurably more satisfying?
Getting started with writing for Cracked and actually having more shows during the -Ber months.
31. How would you describe your personal fashion concept in 2015?
Hats, hats, and more hats.
32. What kept you sane?
Cracked.com, the 8List, Switch Improv, Comedy Manila, Modern, Legacy, and video games.
33. Which celebrity/public figure did you fancy the most?
For a fleeting moment, one of my castmates on "Bara-Bara." My lips are sealed. Then again, I could always volunteer Harriet Sugarcookie for this.
34. What political issue stirred you the most?
The Fallen 44 and the INC Protests.
35. Who did you miss?
So many people, but maybe the one whom I met only twice but pined after for a while.
36. Who was the best new person you met?
Patty. No contest,.
37. Tell us a valuable life lesson you learned in 2015.
Sometimes, you just have to dare.
38. Quote a song lyric that sums up your year.

It sums up my year in that it doesn't make a lick of sense, but it makes me smile.
Posted by Kel Fabie at 3.1.16 No comments: Links to this post