A Second Chance: A Non-Review

Some questions really did not need to be answered. But don't worry, there will be no spoilers here.

I watched "A Second Chance" because I had to. The first film, "One More Chance," is probably my favorite Filipino film of all time, as shallow as that might sound. The idea of a love lost that could be gained back was something that resonated deeply with me then, as it does now. But in between the first film and the second one, something changed, and that something turned me from someone who could completely feel every single pang of pain Basha and Popoy went through to me being a spectator, outside merely looking in.

Basha and Popoy got married. 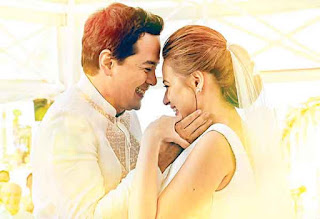 If you didn't know this was gonna happen, then you don't need to watch the movie at all.


I can only relate so much to that, obviously, given that I myself am not. But in that one, big, momentous change for the two of them, their pathos has taken on a kind of gravitas that is no longer within my purview. I accept that. People do change, and certainly, fictional people would, even more so than real people. But the moment they exchanged "I do's," I lost Popoy and Basha to the ether, because I was no longer quite like them.

That isn't so much a fault of the filmmaker as it is a fault of having two characters that were so relatable and powerful as Basha and Popoy that living vicariously through them and their apparent rekindling of their romance towards the end of the first film simply seemed like something we could all aspire to. It felt like something that could indeed come our way. The moment they jump into a stage of life we aren't quite in yet, that sense of verisimilitude is utterly broken for me.

But no, this doesn't make for a bad movie. It just makes for a different one. One that recognizes the plateaus of a marriage far better than it has any business doing, but one that unintentionally alienates me because I'm not there at all. Maybe I will be someday. But given just the trailer, they don't exactly make the married life something aspirational now, do they?

Have you ever put off going to the doctor purely because you're afraid of what you might have, knowing that you're probably not well? That's rather how I felt about this whole thing, in all honesty.

When we left our lovers in "One More Chance," it was open-ended, but rather obvious where it was headed: a reconciliation. We wanted to have the ambiguity and our happy ever after despite all the realism in one lovely bittersweet cake and we wanted to eat it. "A Second Chance" jettisons that, and decides we needed to see more, and as much as we wanted to look away, to not force ourselves to ask those hard questions, we are enthralled to because we know we have to know the answer now that the answer clearly exists.

To say that I am not the target audience of "A Second Chance" would be an understatement, but it is also a massive boon to the makers of this film that I still enjoyed it, no matter how I felt like an outsider, trying to find the smallest of vicarious moments.

And irony of ironies, or should I say appropriately enough, I find those vicarious moments in the moments of pain that both Popoy and Basha go through. Because unfortunately, that is all that remains that I have in common with them: not the moments of wedded bliss, but the moments of indescribable pain. Of emasculation and emotional disembowelment. And if there is one thing this movie franchise has been good at, it has always been king at eliciting pain as a reminder that we still live and we still love.

I can ascribe every single profound philosophical idea I have learned and project them onto the film, but that would be merely self-serving and masturbatory and in no way helpful to even myself. I could look at the ennui of married life and take it as a warning beacon, or ask about the existential quandary one faces in the midst of feelings of inutility. In the end, what one could draw is that one feels, no matter how "shallow" the film may be, and let's face it, it is no more deep or shallow than, say, a Kalyeserye, that we are alive, and that there is something rather than nothing.

Because love lost will always lead to pain until one becomes numb. Because that love goes forth and empties itself out, but simply refuses to extinguish itself.

"A Second Chance" is a beautiful masterpiece in mirroring reality. Unfortunately for me, it is not my reality I am looking at, but a reality I find myself denied of. And it is that jarring break from immersiveness, that moment where I simply cannot suspend my disbelief that I am Popoy or Basha up there in the silverscreen, where I actually find myself impotent and inutile and utterly helpless. And that is the moment where I realize that even at its grittiest moments, the silverscreen love story of Popoy and Basha still far outstrips my own: something I didn't feel in the first film, and something that points me to not like the second film as much, not out of a technical shortcoming.

But out of resentment.
Posted by Kel Fabie at 28.11.15 No comments: Links to this post