1. What did you do in 2016 that you'd never done before?Cooking? I mean, I sorta did that before, but not to this extent. Of course, there's also multiple relationship milestones in 2016 that I have never, ever done before.2. Did you keep your new years' resolutions, and will you make more for next year?I didn't make any last year, and I don't plan to make any this year. As it has always been. This hasn't really changed, huh?3. Did anyone close to you give birth?Doesn't seem like it.4. Did anyone close to you die?Why do you think we all hate 2016?

5. What countries did you visit?Nowhere. So much for traveling in 2016.6. What would you like to have in 2017 that you lacked in 2016?Travel! Thankfully, I'm taking a trip to Cebu this late January, so we're pretty sure this will be corrected. Would also love to have more shows, considering how good 2016 was on that front. And, oh. An article for Cracked, finally?
7. What date from 2016 will remain etched upon your memory, and why?October 22. 10 years of mind reading and comedy! 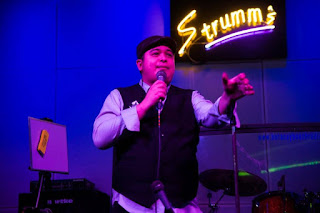 The Tito of Mentalism!

8. What was your biggest achievement of the year?The October 22 show, From Khan To 10, was definitely it, aside from domestic achievements and relationship milestones I would rather keep to myself.9. What was your biggest failure?Letting other people get in my way for way too long, and caring what people think instead of just doing what I should be doing for myself.10. Did you suffer illness or injury?Had to get a CPAP machine this year. Sleep apnea is a thing.11. What was the best thing you bought?The Christmas/Birthday/Anniversary present I got for Patricia The Hun. It was a Nintendo 3DS. ;)12. Whose behavior merited celebration?Patricia The Hun. No explanations needed.

13. Whose behavior appalled you and made you depressed?Oh, you know. The guys who thought that comedy should be a Mean Girls clubhouse.14. Where did most of your money go?MTG, Food and Uber, it seems.15. What did you get really, really, really excited about?The fact that Patricia The Hun went back from the States instead of staying there indefinitely. 16. What song will always remind you of 2016?"Closer," by the Chainsmokers. So many great people died in 2016. I wish this song went with them, too, even if it's anything but a great song.
17. Compared to this time last year, are you:i. happier or sadder? – happierii. thinner or fatter? – fatteriii. richer or poorer? – richer18. What do you wish you'd done more of?Travel, gigs, and actually writing for Cracked. This has been going on for how many years already?19. What do you wish you'd done less of?Wasting my time on lost causes.20. How will you be spending Christmas?Spent in Tagaytay.21. Did you fall in love in 2016?Stayed in love? Absolutely.22. How many one-night stands?Nope.23. What was your favorite TV program?Elementary,without a doubt. I like Sherlock Holmes when he's not being an insufferable twit.24. Do you hate anyone now that you didn't hate this time last year?I would have, but I decided to let it go. 25. What was the best book you read?None, unfortunately.26. What was your greatest musical discovery?
The fact that the guy who sang Pen Pineapple Apple Pen looks just like my old friend and teammate, Osmond Go.

27. What did you want and not get?To bring in more people under the MFT umbrella. It was a quiet part of my life that I can't help but appreciate.28. Favorite film of this year?Civil War. Because it wasn't easy. Civil War ang tunay na mahirap.
29. What did you do on your birthday, and how old were you?I turned 33 with minimal fanfare.30. What one thing would have made your year immeasurably more satisfying?Selling my condo off, and maybe headlining a show I didn't produce myself.31. How would you describe your personal fashion concept in 2016?In transition.32. What kept you sane?Patricia The Hun, Street Fighter V.33. Which celebrity/public figure did you fancy the most?Still Harriet Sugarcookie.
34. What political issue stirred you the most?All of them.35. Who did you miss?Old friends I cut off because of my own stupidity. And Switch Improv.36. Who was the best new person you met?Robert Rubin would be my guess.37. Tell us a valuable life lesson you learned in 2016.Songs about Pens and Pineapples and Apples could make you ridiculously rich in 2016.38. Quote a song lyric that sums up your year.
"Ugh!" - PPAP