The Manila Improv Fest That Was 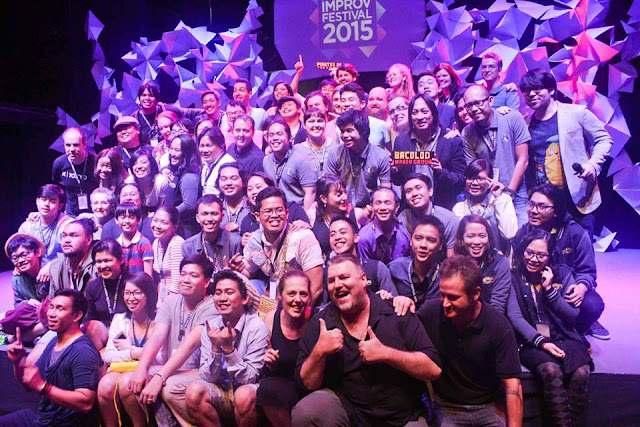 I hate the word "Sepanx," but what could be a more appropriate thing to say here?


Admittedly, looking back at the recently-concluded Manila Improv Festival well over a week after the fact seems rather too late the hero, but I don't really mind. When it comes to this blog, I've been writing for myself for a long while now instead of for an actual audience. And that's fine.

Anyways, I think what really stood out about this particular festival is that the sense of community has really brought the people together more than ever. Were there woes and cares within each group? Yes. Were there anxieties about the quality or lack thereof of certain performances? Absolutely. Did that ruin the festival? Not by a long shot.

At the end of the day, everyone came together. Everyone gave it their best shot. Everyone had memories to recount about the Festival, and most of all, everyone is absolutely looking forward to the next one.

I could give you a blow by blow account of my favorite moments from the entire thing, but given that I'm the 8List guy, I may as well boil it down to 8 things that really stood out for me, on a personal level...

I will never forget Dave of the Beijing Collective for as long as I live, and one of the main reasons is probably this particular workshop. There's nothing like taking a bunch of people with a ridiculously wide range of musical skills. I have to say it was pretty memorable to be creating great music on the fly, and I can't wait to put that to use. 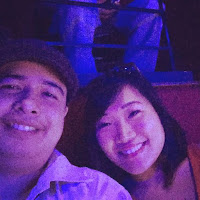 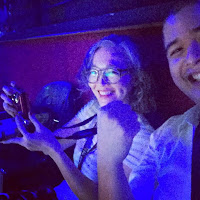 
Made a few new friends within the Festival among people who went to watch or cover the whole thing, or at least to take part in the workshops, but wasn't actually part of any of the improv groups. In fact, when it came to getting to know them, Dave (he figures a lot in my Festival memories this year) actually spurred me on to do something I don't normally do. Jury's still out on the outcome of that one, but needless to say, I've gotten that monkey off my back, at least.

Also, Tomato Kick was an awesome venue for all our crazy after-parties. No doubt, no doubt!

Special mention to Miles, who kept me company for most of the Festival during the latter half!

Two years ago, the Manila Improv Festival allowed me to make a lot of new friends. Seeing them again in the Festival allowed us to pick up where we left off. Whether it was enjoying the comedy stylings of the Pirates of Tokyo Bay, or just catching up with Taichung Improv who really got me into improv wayyyy back in the day by giving me my first taste of performing it, to the fact that Dennis of Taichung is a dead ringer for Jeremy Renner, to PLI's insanity, to finally hitting it off with Dave and Liz and Jay of the Beijing Collective, to seeing a super-polished Zmack! to... man, I'm bound to forget people here, but whatever. It was awesome!

The Improve Company from Singapore! Bacolod Improv Group! Dulaang Ateneo from CDO! These guys are just a few of the new people I had the pleasure of getting to know over the course of the Festival, and I can't help but think how great it would be to see them again soon. Who knows? Maybe I could swing by SG sometime this year...

4. SPIT continues to lead the way!

It's easy to say that without Silly People's Improv Theatre, this entire thing would not even have existed. With 13 years of experience under their belt, I can't help but be thankful for the kindness they have shown Switch Improv over the years. Thank you, SPIT! We couldn't be more grateful for everything you've done to bring improv to the people. 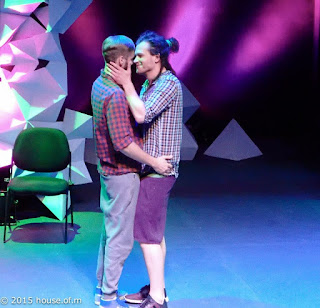 I never heard of "slow comedy" before these guys came along. They pretty much defined it with their performance right off the bat! While most groups can get frenetic and that pace works wonders for them, these guys were just so chill. It was really just something for the ages, and every lady in the audience was practically screaming when the two of them actually kissed onstage. And yes, one of them certainly looks like Heath Ledger. Glad you noticed. 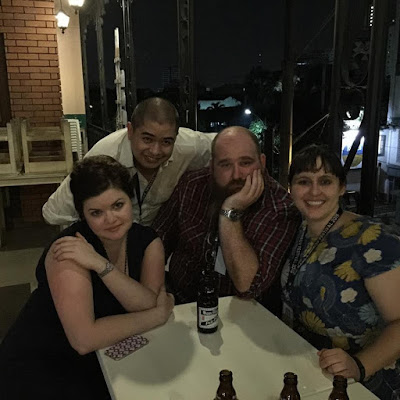 Making me an offer I can't refuse!


Whether it's their two-man show or their three-person Disney-esque musical that they actually debuted at the Festival, Brisbane's pride and joy, the Impromafia, were simply phenomenal. It's hard to determine which I liked more: the fact that they brought something we've never seen before to the table, or the fact that Luke reminded me so much of G.R.R. Martin. Well, let me choose both, then! 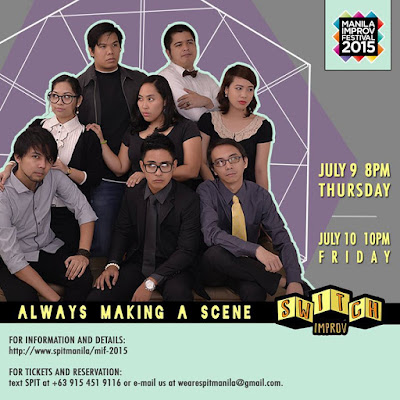 Still making a scene wherever we go.

It's been three years, but let's face it: when the chips are down Switch Improv has always had each other's backs. There's pretty much nothing I could ask for more in this world of entertainment, where years of loyalty can be forgotten in an instant because of petty egocentricity and ridiculous entitlement. I get none of that from Switch Improv. All I get are a bunch of people who care. Who care too much than to stay complacent. Who care too much than to say nothing. And it's that caring I've come to associate with the world of improv, and why no matter what, I get sent to a happier place when I'm there.

I don't need perfection or unbridled harmony. All I need are people who care. And that's why this team came together in the first place.

While I wish I could have been far more detailed in recounting my fond memories of the 2015 Manila Improv Festival, all I know is that it was definitely one for the ages, and it reminds me why I've always loved the improv community that Switch has been a part of for the past three years.
Posted by Kel Fabie at 22.7.15 No comments: Links to this post

There was so much I wanted to talk about. With how the Manila Improv Festival ended the other day, I was still feeling this kind of elation that was all over me, but I guess these things really weren't meant to last, were they?

Now that I've snapped back to reality, I realize I have to get away from it all for a while. I've been burnt out by the world of standup. I've worked too hard in the world of improv. I have very little left in me to keep going, and I know that I have to stop. Breathe. Think. And slow down.

I've always been awkward. I've always been shy. Despite being a performer by trade, there's just something about trying to approach people and making myself known, that attempt at breaking the veil of anonymity, that terrifies me. Because while I like being applauded when I'm onstage, I also like my moments of quiet when I need them. Approaching people tends to jeopardize that.

So it came to pass that I saw a moment enter my life, and I didn't want it to pass me by. With a knowing nod from my friend Dave, I made a leap of faith. I said some things I don't normally say. I did some things I don't normally do. Not for any hope or agenda. Not for some misguided sense of entitlement that this would yield results. But only because I wanted to make sure I didn't let the moment pass me by. I didn't want to sit down there and ask myself if I could have.

It seemed right. It seemed like it was the best way to go about it. And as I've always been, I was wrong. In as quickly as it began, it may have fizzled out just like that, too. And I don't even know where to begin picking myself up. Not for anything, but because once again, I blew it. I ruined it for myself. If I ever wonder from time to time why I'm not happy at a particular point in my life, the reason usually just so happens to be myself. And it disgusts me.

So where do I go from here? Do I get a do-over? Or are we simply going to go with "no take backsies," and that's that? The worst part of this whole episode is I can't even blame anyone but myself for it. I blew it. I screwed it up. Because as always has been the case, my stupid mouth has got me in trouble. I said too much again.

So I'm sorry. I'm sorry I blew it. And if this chapter has to end as abruptly as it begun, I guess I just have to live with that.

Is it too soon to say these things? Is it too soon to feel this way? I can't help but have that sinking feeling that it isn't. This is merely just the latest in a successive string that affirms the pattern. It's not too soon: it's in fact too late.

I may no longer ever find out what that something was, but it was there.