Because I Refuse To Be The Goggles

.:Because They Do Nothing:.

Don't be the goggles.

I recently started hosting a television show, and surprisingly, I didn't really spend any time on the blog promoting it. Now, maybe it's because I've been remiss on blogging lately, and it seemed like going on social media and promoting it there in 140 characters or less was far easier than devoting an entire blog entry to it, but this also explains why I wanted to take the time to choose my words carefully before talking about the show.

And that's because I don't actually want to talk about the show. At least, not directly.

You see, when I auditioned for "Bara-Bara," I came into it with a lot of optimism and hope that we could finally have our very own response to "The Daily Show" or "Last Week Tonight with John Oliver." There's a lot of growing pains within the show at the moment, but I still see that happening in time.

On top of that, I'm even working on a "Colbert Report" kind of webshow this weekend in Burger Company, where I finally get to run with an over-the-top caricature for once, instead of the more serious non-character I am on "Bara-Bara." The show is going to be called "Better Late Than Never." It's gonna be a lot of fun.

Anyways, let's talk about what I really wanted to talk about. I think a visual aid is very necessary at this point. 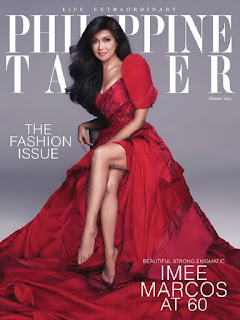 Hello there, Elizabeth Bathory (or not)!

If you ever wanted living proof of how evil can triumph when good people do nothing, look no further than this. It's the equivalent of a German publication coming out with the headline "Hitler did nothing wrong," if you ask me. Or do you think I'm merely exaggerating?

When we were talking about Martial Law during the taping for Bara-Bara's first episode, I had to keep a lid on all my opinions about people who were glorifying Martial Law, because I didn't want to dominate the conversation. It was sobering, really: true, none of the cast were political analysts, but that's exactly why it becomes very unconvincing to any neo-loyalist that Martial Law was really that bad, if we didn't put a concerted effort towards correcting those notions.

When we removed the Marcoses from power in EDSA, we said "never again." We said "not on our watch."

And then we stopped watching.

This week, Bongbong Marcos files his candidacy to become a vice-president. The sins of the father should not by default pass unto his son, but not when it's pretty much an inheritance of millions, maybe billions - of our money, ill-gotten under the cloak and dagger of the Marcos regime. 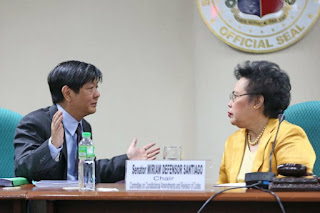 Really? We didn't see this coming?

The sins of the father should not by default pass unto his son, unless the son willfully denies what his father has done, and chillingly promises to uphold his dad's legacy in the same breath.

The Marcoses are erudite, educated, eloquent, and most certainly empowered. How could they not, when they took all our money to make themselves all of these things? Our money. Taken along with thousands upon thousands of lives, as a matter of historical fact.

Nation,we forfeited the right to attack anyone who thinks the Marcoses aren't so bad the minute we let them creep back in to the point where another dictator himself, the late Lee Kwan Yew, could only shake his head in disbelief. According to him:

"The difference lies in the culture of the Filipino people. It is a soft, forgiving culture. Only in the Philippines could a leader like Ferdinand Marcos, who pillaged his country for over twenty years, still be considered for a national burial. Insignificant amounts of the loot have been recovered, yet his wife and children were allowed to return and engage in politics."

It is with that fact that we know: we have failed this nation.

When a certain article calls us "uneducated," he doesn't do it merely to posit a false dichotomy (which he's still totally doing, by the way) and paint us as emotional people who have a knee-jerk reaction to anything Marcos. He is calling us out for sleeping on the job. In all the hype of #NeverAgain, we still managed to look the other way for the Marcos cronies, much in the same way Voldemort's Dark Eaters slowly made their way back into the wizard community, all hiding under the guise of being under the control of the Imperius curse. 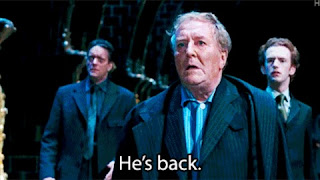 Yes, nation: we have become every bit as complacent as Cornelius Fudge. We stood by and did nothing when Enrile and Ramos made their way back to power, because, hey, they helped us out when we needed them right? We stood by and did nothing when the Marcos family slowly revised the story and made it seem that the ends of the Marcos regime justified the means, and nobody actually paid attention to what the ends were.

We are every bit as competent as a school that specifically had a House whose member's defining characteristic is that they are 99% evil.

We have failed this country, and now, we are slowly but surely paying the price, as if we aren't already are. We took it too easy. We treated them with kid gloves. We thought they were harmless, but all they really needed was the Dark Mark to send them sprawling back into action, and all we could do is look on and wonder what we did wrong.

That's exactly the problem. For most of us, we did nothing. We were complacent in thinking that it would be impossible for anyone to ignore what the horrors of Martial Law truly were. We were self-assured that time wouldn't erase the wrongs done to us as a nation by the Marcoses as a family. We were wrong.

We were mistaken to think that the golden standard were our supposed liberators, the Aquino's, when they were little more than a transition that we should have built ourselves up from. They were the baseline, not the exemplar: yet we confused the former with the latter, and here we are now, disappointed with that realization.

It shouldn't have taken us as long as it has to realize: this was never Marcos vs. Aquino. Anyone who thinks these are the only valid choices to be had in this discussion is living in a very sad world.

In the meantime, we now have a man who insists we shouldn't condemn us for having his father's name, while also demanding we recognize him for the achievements of his own father. He wants to have it both ways, and we're pretty much letting him have it both ways. He wants us to forget the atrocities of martial law, but he wants us to remember the so-called glory years of his father's administration. He wants us to give him a chance to be his own man, yet he quickly proclaims that his dad's era was the kind of golden age he wants to bring back.

And now, his very own running mate, a woman who worked so hard to make us believe she was for justice and against corruption, decided to absolve him of his family's crimes, saying they don't owe us an apology for martial law, while crucifying her political rival over the very same topic. Slytherin, indeed. They slithered back in. After Martial Law. After Jose Velarde. After countless other breaches of trust. We are truly a forgiving people. And a forgetful one, at that.

This is why I refuse to be the goggles. I refuse to do nothing. I refuse to stand idly by and let him go there unchallenged, assuming what he likely believes to be his birthright. I am not Harry Potter, nor Neville Longbottom. Heck, I'd be lucky to even be Argus Filch. But what I will not be is quiet. For when the Death Eaters march in once again, I will at least get to scream out "Expelliarmus" once, before someone inevitably Avada Kedavra's me. I may have taken this analogy a little too far.

I agree with Miriam on one thing: indeed, the Marcoses don't owe us an apology. What they owe us is justice. Justice long overdue. Justice that still cries out to this very day. Justice they have tried to deny of countless victims for so long, knowing full well that the Marcos era was and has always been a family affair. Anyone who wants to pretend it wasn't need only take a look at the facts.

Would you ever elect Draco Malfoy as the Minister of Magic, if you were a wizard? How about Deputy Minister? How you answer to this seemingly whimsical question could very well explain how you feel about the Marcoses, in the end.
Posted by Kel Fabie at 16.10.15 No comments: Links to this post