Mission Accomplished, But It Gets Lonely Up There 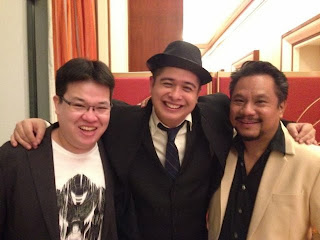 It was an epic weekend, to put it mildly. As I was there, hosting the big show in Solaire, with Rex Navarette and Mike Unson as the featured performers, I really couldn't help but feel very happy that I was set to close my 2013 with a bang, as far as my hosting and magic were concerned. It was a whole lot more than I could have ever asked for.

Couple that with the fact that I had an amazing time the next day despite being a zombie, as I hosted Sean and Hai's wedding, and spent the day with the JGL. It was definitely a great time with Clair, JM, Sacha, Wayne, Peppy, Diane, Mark, and of course, the newlyweds, as I squeezed in as many Rick Astley lyrics and Mario references as I could throughout the reception. It was a blast, really. An absolute blast.

This has been a fairly quiet 2013 for my performance career, but with Switch and standup and mentalism and even more hosting to come soon, I couldn't be more excited at the inroads this year's experiences has managed to pave. It's been a blast, and it's only going to get better in 2014.

Weddings always have that effect on me. I'm so happy for the couple, but I can't help but wonder about where I'm headed. If I'd ever find myself in the same state.

I've gotten rather jaded lately, and the fact that I'm a Christmas grinch, and there I was at a wedding so near Christmas, so you can just imagine how that bodes for my emotional state. I won't harp on the whole "malamig ang Pasko" bit, seeing as it won't be long before I end up vituperating about February 14 soon enough, but damn, it does get lonely from where I stand.

I hate it because there have been so many words said, so many things done, yet in the end, it's little more than lip service, and the status quo still remains. I'm not happy with it. I'm definitely far from satisfied with it, and all the so-called gratitude in the world feels more and more empty when everything becomes just a one-sided parody of what a relationship between two people is supposed to be.