2 Hot 4 8List: 8 Sassy Comebacks We Wish Korina and Anderson Made to Each Other

(2Hot 4 8List are lists that for various, often obvious reasons, need to be published on a personal capacity, rather than as something that de facto represents the website I love to write for. I hope you enjoy it, because whether or not they ended up on the site, I still worked pretty hard on them, minus the epic graphic design you've come to know and love from the 8List.)


.:8 Sassy Comebacks We Wish Korina and Anderson Made to Each Other:.


In the recent word war between Korina Sanchez and Anderson Cooper, the latter’s passive-aggressive ways mostly won in the eyes of the public.


It basically went down like this:
Korina: “Itong si Anderson Cooper, sabi wala daw government presence sa Tacloban. Mukhang hindi niya alam ang sinasabi niya.”
Anderson: “Miss Sanchez is welcome to go there (Tacloban City) and I would urge her to go there. I don’t know if she has, but her husband is the interior minister and I’m sure she can arrange a flight.”


Since last week, Korina is on the field for her program “Rated K,” which means rumors of her being suspended for her tiff with Anderson are effectively debunked. Meanwhile, Anderson has turned his attention from feuding with Korina to feuding with Alec Baldwin.

While even Frosty The Snowman himself may have felt the burn Anderson Cooper inflicted upon Korina Sanchez in their brief non-exchange, we can imagine ourselves looking into eight different alternate universes where both journalists were sassier and cattier than they already were. 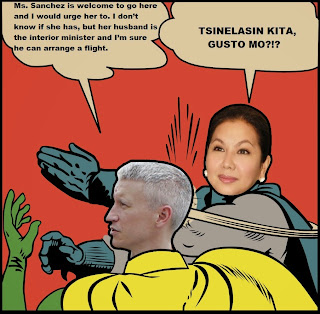 Of course, she would know a thing or two about slippers. 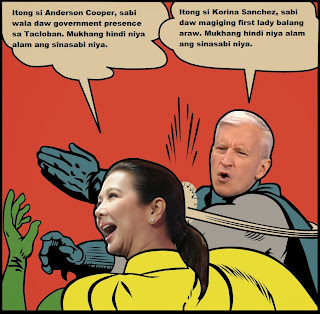 Imagine if she stuck it out with Noynoy... 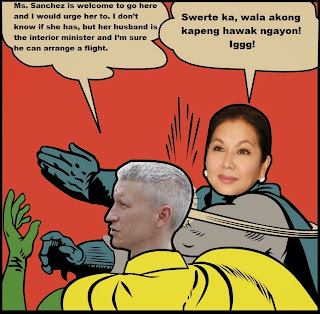 There is nothing more Pinoy than using "iggg" as a sound effect. 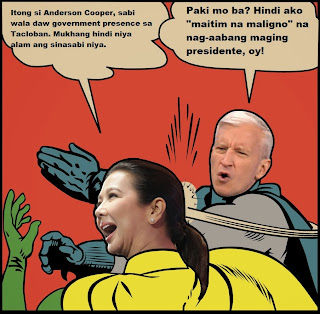 You can't beat the master, Korina. 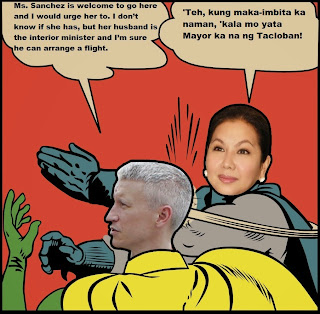 Pour some more milk for these kitties! 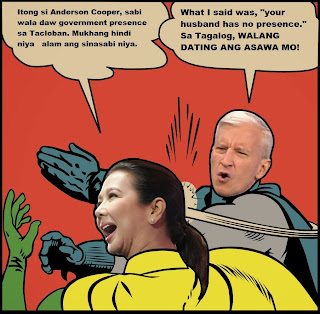 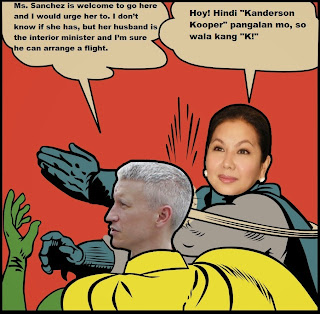 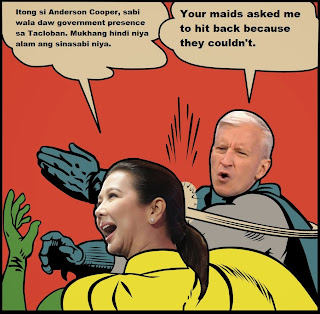