It's been nearly ten years for myself as a blogger, and I cannot help but feel nostalgic about it. True, I haven't really managed making a comprehensive retrospective for my blog so far, but it has been an amazing ten years, and I hope I will keep on going and blogging for as long as I have the mental faculties to do it.

Or at least, unless nobody ever decides to sue me for whatever I may have blogged here lest I end up in prison over it.

Considering how eager the PNP seems to be to use the Cybercrime Bill to strike down people who speak ill of policemen, we are really going into unchartered territory at this point. Beware, because they dare.

Ten years of blogging, and today, we come face to face with this. Wow.

Last week, I was part of the Cyberfreedom Forum organized by Senator TG Guingona, and never have I found more to be awed and disappointed by than to discover that only Senator Guingona even bothered to read the Cybercrime bill enough to actually see why it was problematic. Just ask Chiz Escudero, he'd tell you. How could 23 other senators completely miss this or just willfully allow this? Double jeopardy, using the internet as an aggravating circumstance in and by itself, an abridgement of due process, and an archaic libel law upheld in the cyber arena? What were these people even thinking?!?

This isn't even considering so many other ridiculously misguided sections found in the bill that any lawyer worth their salt would be quick to point out to you. It is just a fustercluck of such epic proportions that I can't help but wonder how they could treat the internet with such contempt and such carelessness.

So here I am, celebrating ten years as a blogger. Yet here I am, also standing against these unmistakable transgressions against my rights as a netizen. What should be a moment of celebration for me is instead a moment of trepidation, because I know that while I may not ever get into legal trouble because of my blog, I could be, if it were their whim and fancy, and there's not a damned thing I could do about it if I let it slide now.

The Cybercrime Law is certainly a hot-button topic and I have already written about it on the POC.  Despite that, it bears repeating here on this blog: this is an attack on our freedom. It is the kind of freedom our heroes have died for that we may enjoy it, no matter how trivial or mundane our exercise of the freedom is. That's exactly the whole point of freedom, after all: you get to exercise it as you see fit, within reason. What this law attempts to do is to abridge that freedom in favor of caprice and arbitrariness. At no point are they required to go through due process, and it sickens me that nobody is watching these watchmen as they level veiled threats against us and attempt to villify the internet so as to pretend that their cause is just.

I am Marcelle Fabie. I have been a blogger for ten years, writing with a real name to my words.

And I will not be silenced.

We will not be silenced. 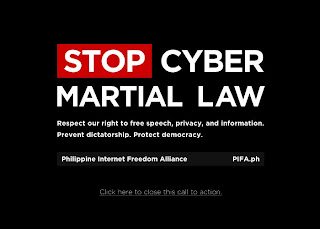